Sometimes the best things really do come in small packages

I have never really thought of the Neptunia series as one of my favourite JRPG franchises, but the more I play them the more endearing they become. Neptunia games are like comfort food; While many new games and new IPs want to tackle heavy subjects, you will never get that in a Neptunia game. In fact, you get quite the opposite – A self-effacing, piss-take of its own game and characters, beautifully wrapped up in a silly fantasy world, silly story, but with a huge amount of laughs along the way. Neptunia games seem to be one of the last bastions of light in the gaming world that remember games can just be fun, with no deeper agenda. The latest game entry into this series combines the Neptunia and Senran Kagura franchises for a terrific romp, albeit a little too short.

The story premise is that two warring ninja factions (Team Neptune v Team Senran) have their world invaded by a mysterious enemy that requires the two teams to put aside their differences and fight together to rid their world of this new threat. However, the leader of this new group issues an ultimatum that throws the world into chaos!

“As the struggle for control increased between the Daimyos of the nations, tensions rose between the two great nations, each of which was home to one of the major schools of martial arts.

The mechanical ninja army overran the smaller nations in an instant, and its leader, Yoh Gamer, made an announcement to the world.

The “Super NINJA War” to decide the world’s strongest school is about to begin!”

Although the game is advertised as a Neptunia x SENRAN KAGURA crossover, the story is delivered mainly from the point of view of Team Neptunia, but the SENRAN KAGURA girls all have major roles to play. You do indeed get to use and play with each of them during the adventure, but there is also a lot of narrative interaction with both franchises.

The star of the show is the genuinely laugh out loud humour. When I started the game it took a full hour of very little gameplay and a lot of narrative before I even got to my first save point, however, I didn’t care as I was laughing too much.

Part of the reason the conversations are so funny is that the characters frequently break the fourth wall. The characters know they are part of the game and refer to themselves as such. The writing is done with such casual aplomb you quite often sit there and think, did they really just say that?! This happens even more when the girls, unlike any other franchise I can think of, openly talk about, compare and even ridicule each other on the size of each of their chests. At times it’s puerile, South Park-Esque humour, which you will either find hilarious or be offended by, but as it’s done in such a light-hearted manner that they are most certainly intending it to be taken with tongue firmly in cheek.

The gameplay has a very simple loop, alongside some very simple combat mechanics, which allows for players to not have to think too hard to enjoy the ride.

A section of dialogue is delivered with 2D stills as the backdrop and a lot of text to read (there is no English dub), which will set up what the next mission will be. These missions can range from delivering a message to defeating certain enemies.

Before you go you can visit a shop to stock up on items and upgrade or buy new weapons and accessories before setting off. Part of the reason the game is relatively short, especially for a JRPG, is that the dungeons areas are all fairly small and limited in their scope, so you are never there for too long. Small maps, with icons showing you where you need to go to progress the story and scant few side paths for exploration, mean there is never much to see in a level.

However, the combat is excellent. There really isn’t much depth to the combat elements, so that means players are allowed to just enjoy the system, especially when there are boss fights that put up more of a challenge.

The character you control, who can be easily swapped out mid-fight, has a basic attack with their melee weapon, a ranged attack with a throwable ninja weapon, guard, dodge and jump. There are also Ninja skills that, when you hold down ZL, briefly pause the action for you to unleash as many special ninja attacks as the attack trigger gauge will allow. These attacks have a value assigned to them which means you can’t spam the most powerful one more than a couple of times as its value is too high for the trigger gauge.

The ninja skills and throwable ninja weapons have cooldown times before you can use them again. For an extra special finish, building up enough attacks will allow for a mighty one time only super hit move that can be activated by pressing two buttons but the game will highlight when you can do this. This attack is especially useful for powerful end of level boss fights.

When you defeat enemies or go to shops you can buy spirit gems, which are small buffs you can assign to each character (or all of them) to increase their statistics, such as melee damage, cooldown times etc. Exploring the world (what there is of it) can also reward you if you find some loot, which is mainly just consumables like health items.

And that’s it. Nothing fancy, just very simplistic combat and exploring systems. Although for the majority of the enemies it’s easy to get by with a little bit of button-mashing followed by a quick dodge, this doesn’t necessarily work for the harder mid-level or end of level boss fights. For these, you are well-advised to learn the moves of the enemy, hit its weak points (usually from behind) and float around the battlefield like a true ninja, taking the opportunity to strike when the enemy allows you to do so. The enemy will take a lot of health off your character’s life with just a few hits, so remember you are a ninja on the battlefield, not a tank!

The graphics on the Nintendo Switch are, for the most part, outstanding. The fidelity on the Switch, when compared to the last Neptune game I played (Neptune Reverse on the PS4), is vastly superior. The movement, animations, clarity of view and the ease with which you are able to see everything is superb. The artwork is also stunning, especially the character designs, background settings and 2D models during the sections of the game when you are watching a lengthy dialogue. Despite watching and reading a lot of text, the narrative sections are brought to life with movement and humorous anime-style emojis that pop up to deliver expressions.

While some of the still drawings are stunning to look at, the world you play in is devoid of a lot of interest but not barren. Simple environments and basic enemy characters limit the visual appeal at times, but this is made up for in spades with the terrific and sometimes flashy ninja special moves the girls themselves can make. Colourful and exciting finishers really bring a lot of visual spectacle and energy to the gameplay. The only real issue I encountered was quite a lot of frame rate dips on the Switch. Just walking along a path and jumping in the air caused the frame rate to dip, let alone when in the middle of combat delivering a flashy ninja skill or three. The frame rate didn’t dip enough to ruin the experience, but it was certainly enough to be noticeable. Aside from that, there weren’t any other technical issues during my playthrough at all.

The audio of the game was excellent, and there were many highlights, the first and most obvious being the voice acting. Despite it being delivered in Japanese and my not personally understanding pretty much anything, the voice acting really conveyed mischief and hilarity and was crystal clear. The musical score was superb and had a very distinct “Muramasa Rebirth” vibe of classical Japanese wind and drum instruments. This was mixed with a variety of interesting background gameplay soundtracks that ranged from a steel drum sounding jaunty menu music to hard rock during some action sequences.

The weapon noises weren’t especially wonderful, but the unleashing of a powerful energetic finisher or ninja skill was. They conveyed power each time which added to the satisfaction of delivering the blow. The audio was pretty much wonderful across the board.

As always though, the series protagonist, Neptune, voiced by the wonderful Rie Tanaka, was outstanding in her delivery of Neptune/Purple Heart. Nep Nep Nep! 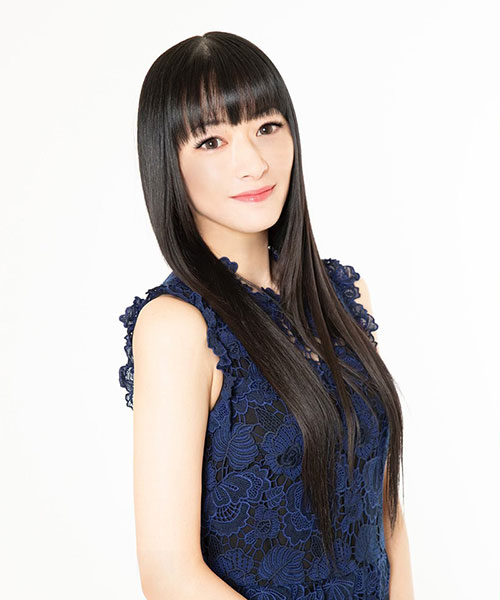 How did your character appeal to you when performing as them in this game?

Just seeing Purple Heart going out to battle with an all-new ninja outfit makes me so excited! We’ve also recorded new voices for this, and I hope you’ll play as Purple Heart!

Please tell us about any scenes that left an impression on you.

I think it ends up being that one scene where we get on the peaches… (laughs) I’d like it if you listen to the song so much that it gets stuck in your head. ♪ Have some fun and sing along with it too!

Do you have a message for the fans?

Once “Neptunia x SENRAN KAGURA: Ninja Wars” releases, please play it a whole bunch! Nep and Purple Heart are waiting for you! I hope you’ll sing along to the Peaches & Cream Meditation Folk Song too~♪

Finally, the presentation of the game was classy from beginning to end. It really feels like Idea Factory put a lot of time, care and money into this project. Everything was slick, classy, well delivered, and superior to the previous game. There is little in the way of replayability so it’s very much a one and done experience, but the effort put into the game can be seen by the quality of the opening cinematic.

Apart from minor frame rate drops and the small and fairly barren dungeons to explore, there is a lot to like about this hilarious new Neptunia adventure. With simple but fun gameplay mechanics, stunning artwork and wonderful audio, Neptunia X SENRAN KAGURA stands out as a shining example of a simple to play yet fun and hugely enjoyable game.

If I'm not thinking about James Bond, hack and slash, JRPG's, stealth, or story driven games, I'll be wishing I was skiing instead.

MX vs ATV All Out Review